Infection with the parasite Lepeoptheirus Salmonis, better known as the salmon louse, is the greatest health challenge for the fish farming industry today.

Enormous resources are used to control the number of lice in the farm cages. Increasing resistance to delousing agents at our disposal means that we have few effective medicines to counter lice today. A strategic approach with broader use of alternative treatment methods must be used to reduce the development of resistance and to gain control of lice numbers. 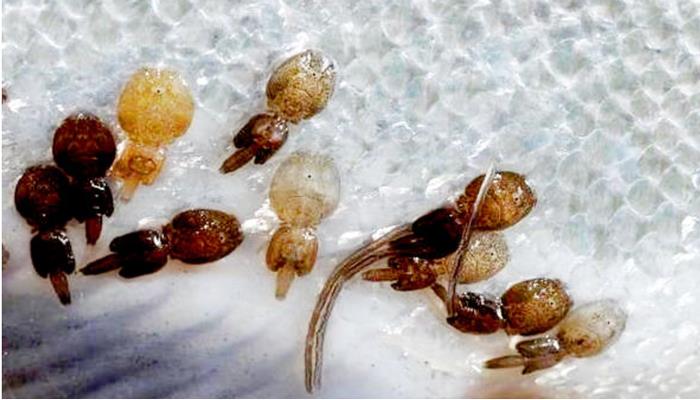 Salmon lice have always been present in Norwegian waters. But some areas have seen increased numbers of lice on wild salmon in areas where salmon are farmed. To prevent damage to wild salmon strains, the authorities have therefore specified an upper limit to the number of lice it is possible to have in a fish farm. If this limit is exceeded, treatment measures must be initiated straightaway. These measures often mean handling and stress for the fish, and we have seen a substantial increase in the number of cases of deaths caused by handling in recent years.

The salmon louse that can result in major challenge sin this country, Lepeoptheirus Salmonis is a member of the crustacean family. It attacks fish in the larva stage - copepodites - by attaching itself the salmon and fixing an anchor in the skin of the fish.

It injects a substance that restrains the salmon's immune system locally. It remains there while it develops through several stages until it becomes a full-grown adult louse. The mobile lice move around the salmon and feed on mucus and skin cells and create punctures in the skin barrier. Wounds can occur and the fish can have problems with maintaining its fluid balance.

Lice have shown themselves to be extremely adaptable to most measures we use to control them. There is widespread resistance to the most commonly used treatment agents to combat lice, and this has resulted in an increased need for alternative strategies to retain the effectiveness of the agents we have.

The strategies involve using operational measures and biological methods to reduce infection pressure as much as possible. Operational measures can involve using devices to prevent lice from coming into contact with salmon, for example lice skirts and closed cages etc. There are also measures that enable the fish to go to lower water levels where copepodites do not thrive. Use of light and feeding deeper in the water, and devices such as snorkel cages and submersible cages have been used to enable the fish to go deeper. Some farms also use laser technology and UV technology in the fight against lice. A combination of such measures is probably an important part of the solution to the lice problem.

Operational measures also include synchronised treatments within an area, and rotation between different treatment agents, best of all after the use of sensitivity tests.

Biological measures may include

Strategic use of feed:

Limiting the consequences of salmon lice through strategic feeding based on

Strengthening the outer barriers of the fish by using feed with functional ingredients than can influence the composition and thickness of the mucus layer on the skin. The mucus layer can increase the general ability of the fish to resist and can reduce louse infestation by not allowing the salmon lice to attach themselves to the salmon. In addition, a thicker layer of mucus can better protect against damage caused when the larvae feed on the salmon's mucus layer and skin.

It is important that the fish is as robust as possible in advance of any delousing situations, as these often involve stress and mechanical pressures. To give the fish feed that is based on both strengthening the mucus layer and supplying antioxidants will contribute to the fish surviving the treatment with the least possible injury and mortality.

Delousing is a stressful procedure and in stressful situations the tissue's need for oxygen increases. To compensate for this increased need for oxygen, it is the circulatory system that must increase its supply of oxygen to the tissue.

The salmon's heart compensates first and foremost by increasing the amount of blood it pumps with each beat, not by increasing the pulse rate as in humans. If the heart is weakened or undersized, there is a lot of evidence that indicates that the circulatory system cannot handle the increased pressure and the fish can die from heart failure. BioMar has shown that feed can increase the endurance of the heart and its ability to compensate.