About HSMI and CMS

HSMI and CMS cause extensive financial loss to the industry through increased mortality and reduced growth. According to annual fish health reports published by the Norwegian Veterinary Institute, there has been a steady increase in cases of both diseases in recent years.

HSMI is now considered as occurring with such frequency that it has been removed from the list of notifiable diseases. There are no medicines against these diseases and treatment of them is confined to prevention and limitation of the extent of damage.

HSMI is one of the most prevalent diseases, and is associated with the presence of Piscint orthoreovirus (PRV). It precipitates inflammation and tissue damage in multiple organs, but the heart muscle and skeletal musculature are especially affected. Diseased fish generate losses for the farmer through reduced growth. In many instances, HSMI also increases mortality rates associated with handling the fish.

Cardiomyopathy Syndrome (CMS), also called “Broken Heart Syndrome” is caused by a totivirus that infects and produces inflammation of the heart muscle. This leads to a destruction of the tissue, and the heart wall can rupture if the heart is subjected to increased load during handling and stress.

CMS often strikes larger fish when they are approaching harvesting, and thus leads to huge financial loss for affected farmers.

Experiments have shown that the severity of the pathological findings may be related to the degree of inflammation in the tissue. The weakened heart tissue makes the fish less well equipped to withstand stress, and it is apparent that the fish are unable to tolerate activities such as moving, grading or removal of lice.

There are no medicines against these diseases and treatment of them is confined to prevention and limitation of the extent of damage.

Research suggests that both exercise and nutrition affect the ability of fish to resist disease, and we see clear signs that proper nutrition with increased access to EPA and DHA makes fish more resistant to viral diseases such as HSMI and CMS. 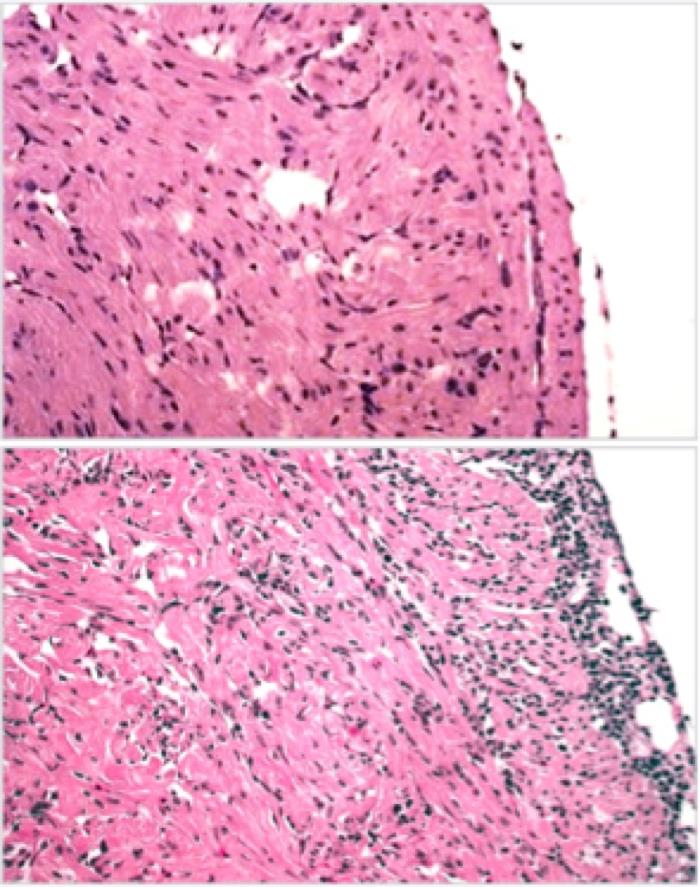 The images show sections of cardiac musculature from a healthy heart (top) and a heart with inflammation resulting from PRV (bottom). Inflamed cells are depicted as having a more bluish hue in the heart's compact layer.

The images were taken by Professor Øystein Evensen at the Faculty of Veterinary Medicine and Biosciences, the Norwegian University of Life Sciences (NMBU).