The BioMar Group, a leading international fish feed specialist, and the Sagun Group, one of the leading Turkish companies within aquaculture, fish processing and trading, announced at the Seafood Show in Brussels the formation of a Joint‐Venture fish feed company in Turkey, which also includes the construction of a fish feed factory in Turkey.

The President of the Sagun Group Mr. Ahmet Tuncay Sagun and the CEO of the BioMar Group Mr. Torben Svejgaard used the celebration of the 10th Anniversary of the Turkish Pavilion at the Seafood Show in Brussels to sign a Memorandum of Understanding as the basis for forming a Joint‐Venture company in Turkey. The factory is expected to enter operation towards the end of 2015, and will supply fish feed to both Turkey and some of the neighbouring countries.

The annual Turkish aquaculture production has grown to around 200.000 tons of fish in recent years. Today Turkey is the second largest aquaculture nation in Europe after Norway. On top of supplying the growing domestic fish consumption, Turkey has also become a major supplier of fish species like sea bass, sea bream, and trout to the European market. In order for the Turkish aquaculture industry to remain competitive there is a growing need for new more efficient, sustainable, and environmental friendly diets and production methods.

“BioMar is well‐known for delivering high performance fish feed with a sustainable profile, and it has an outstanding technical customer service”, said Mr. Sagun at the occasion of the signature. He believes this will also be some of the key contributions of the new Joint‐Venture company to the Turkish aquaculture industry.

Mr. Svejgaard expressed his satisfaction with the agreement: “Turkey is one of the leading aquaculture nations in Europe. It still has a tremendous growth potential with excellent natural conditions for fish farming, a growing domestic fish consumption as well as good access to export markets for both fish and fish feed. We are extremely pleased to enter this agreement with the Sagun Group. The Sagun Group is a solid company with a long history and an excellent network in Turkey and internationally. This will facilitate the market access for the new Joint‐Venture factory.”

Mr. Sagun was equally pleased with the agreement: “BioMar is a perfect match for the Sagun Group. The know‐how of BioMar within areas like fish feed development, sourcing, and feed manufacturing will benefit both us and other fish farmers in Turkey. BioMar is the leading supplier of high performance feed to sea bass, sea bream, and trout in Europe, and we are proud to enter into a collaboration agreement with BioMar on equal terms. We believe this Joint‐ Venture will help to develop and strengthen the whole aquaculture sector in Turkey.”

The BioMar Group is one of the leading suppliers of high performance fish feed to the aquaculture industry. Currently BioMar operates 11 fish feed factories in Norway, Chile, Denmark, Scotland, Spain, France, Greece, and Costa Rica. Roughly one out of five farmed fish produced in Europe, Chile and South and Central America are fed with BioMar fish feed. Worldwide the BioMar Group supplies feed to around 60 countries and to more than 30 different fish species. The BioMar Group is fully owned by the Danish industrial group Schouw & Co, which is listed on the Copenhagen Stock Exchange.

The Sagun Group is a privately held company consisting of 5 different companies operating 8 production facilities across Turkey. The main business areas are aquaculture and fish processing as wells as exportation and importation of fish. The Sagun Group is well known both domestically in Turkey and in export markets across the world with a range of strong consumer brands. The President and owner of the Sagun Group, Mr. Ahmet Tuncay Sagun is the 3rd generation running the family company. 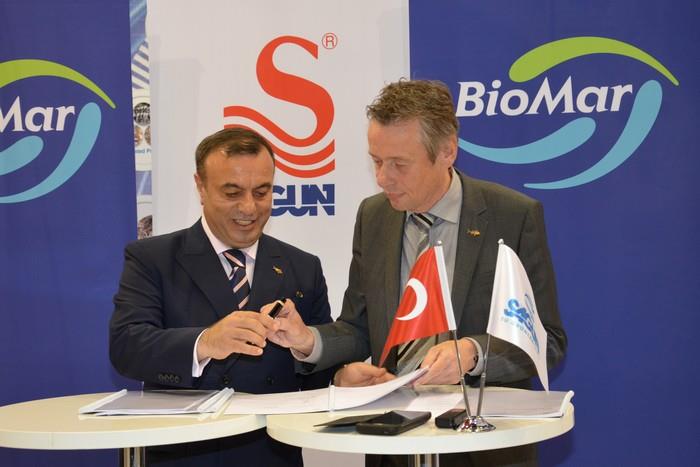