RAS expands towards marine nurseries and this asks for special attention on specific properties of the feed, such as faeces stability. BioMar presents LARVIVA ORBIT, its new aquafeed specially developed for marine RAS nurseries. LARVIVA ORBIT is planned to be available on the market in the first quarter of 2020. From spring 2020, sea bass and sea bream hatcheries will have access to ORBIT feeds specifically designed for prolonging the growth of fry in land-based facilities before transfer to sea cages.

Product development is traditionally characterized as the transformation of a market opportunity into a product available for sale, with traditional approaches often being market-oriented and products specifically developed to satisfy a customer need or to explore a niche. The catalyst of innovative companies such as BioMar are ideas arising from multiple sources, spanning from Research & Development (R&D) to Quality and Sales departments. These ideas respond to farmers’ needs, resolve product handicaps, consolidate previously delivered solutions, or are plainly ground-breaking. For instance, as the aquaculture sector changes towards economically and environmentally sustainable food production systems, there has been an increasing trend for shifting marine nurseries to recirculating aquaculture systems (RAS). This shift alone is expected to reduce the nursery bottleneck and to shorten production cycles, on account of more stable water quality, lower heating or cooling costs, and better production planning. Several logistical advantages are also expected, mainly associated with vaccination of fingerlings and larger mesh sizes in grow-out cages, as fingerlings will be transferred to sea at larger sizes. Despite this expansion of RAS towards marine nurseries and the concomitant progress of the associated technologies, the development of aquafeeds for marine RAS nurseries has been largely overlooked.

Building on the idea of developing a novel feed product specific for marine RAS nurseries, BioMar took advantage of its strong expertise in RAS aquafeeds. The following three concepts of the ORBIT range of specialized feeds for freshwater RAS were the cornerstones of the new product: nutrition, pellet quality, and faecal stability. The first two concepts are already covered by BioMar’s LARVIVA nursery feed range for fish larvae and small fry, more specifically by feed type INICIO Plus M with its optimal protein to energy ratio, perfectly balanced amino acid composition, and targeted raw material selection. Therefore, the focus on the development of the new product – LARVIVA ORBIT – was faecal stability. 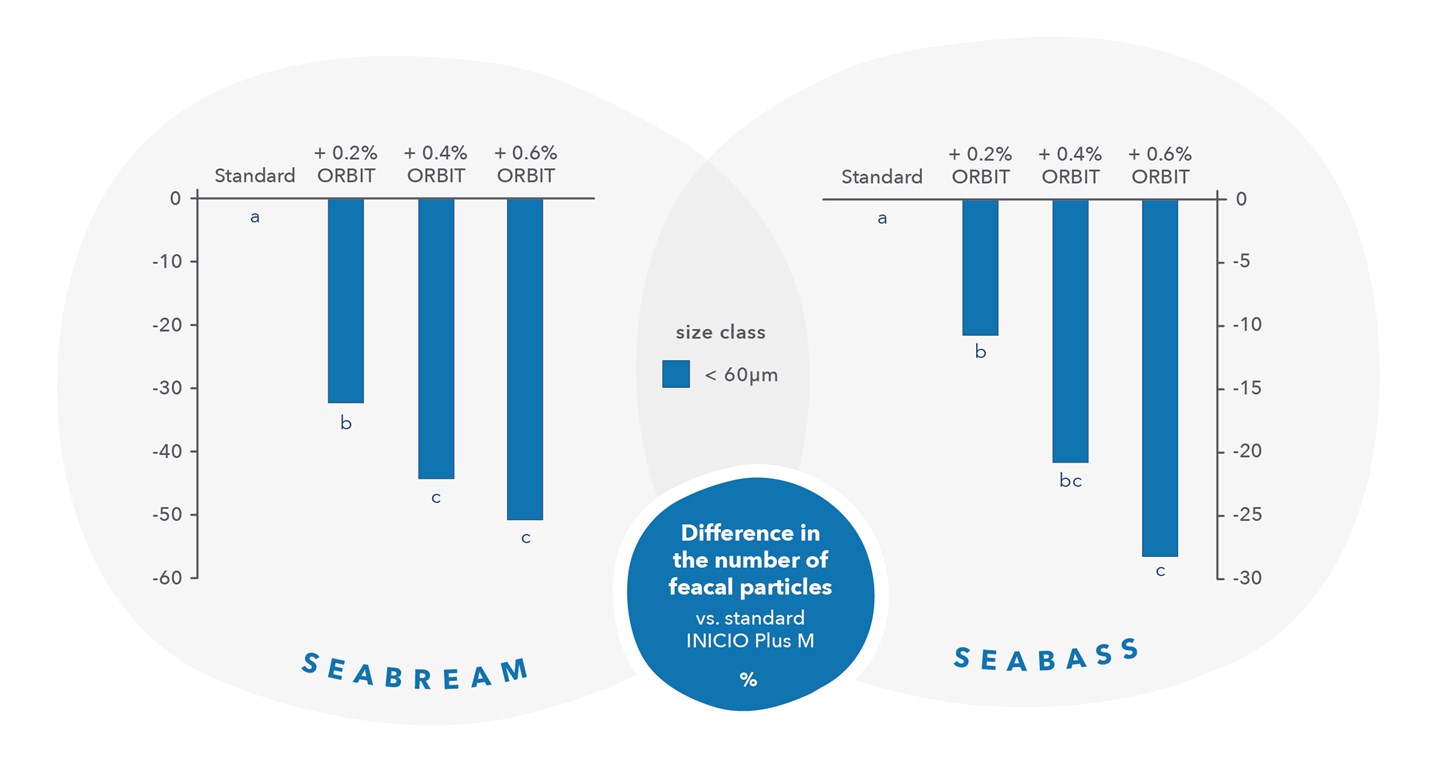 The next step in BioMar’s product development process for a specific feed for marine RAS nurseries was a thorough R&D assessment involving multiple small-scale trials performed externally with research partners. As such, a small-scale trial was conducted at CTAQUA (Cádiz, Spain) to test the effects of LARVIVA ORBIT on the stability of faecal structure, which is key for the effective removal of faeces by mechanical filters and for reducing the load on biofilters in RAS. To this end, four diets were provided to seabream and seabass fry, run in quadruplicates (per species and per diet), with Standard feed INICIO Plus M as the base formulation and with the addition of varying levels of the ORBIT package (0, 0.2, 0.4, or 0.6%). After 60 days, the number of suspended faecal particles <60 μm decreased significantly in the tanks where the ORBIT package was used (Figure 1). In addition, the concentration of suspended faecal particles <30 μm decreased notably, and a higher supplementation of the ORBIT package resulted in a more evident decrease. This reduction in the concentration of faecal particles in suspension demonstrated the combined effect of Standard INICIO Plus M and ORBIT on improving faecal structure stability while maintaining fish performance, thereby supporting the further development and testing of LARVIVA ORBIT.

After the small-scale R&D trials, BioMar’s product development process moved to the BioFarm step wherein large-scale proof-of-concept tests are performed before product launching. A first large-scale trial was performed to validate the effect of LARVIVA ORBIT on faecal stability using seabass fry (6 to 15 g body weight) reared on two diets: Standard (INICIO Plus M) and LARVIVA ORBIT. Three tanks, each containing 165,000 seabass were used per diet to evaluate faecal stability after 15 days. Faecal stability was assessed both visually, using BioMar’s scoring system, and numerically, by particle size distribution. Total suspended solids (TSS) and biological oxygen demand (BOD) were also evaluated as a proxy for water quality. In the tanks where fish were fed the Standard diet, faecal discharge appeared “dusty” with little to no visible intact faecal casts, with 60% of particles being smaller than 63 μm. In contrast, in the tanks containing fish fed LARVIVA ORBIT, faecal casts were clearly visible and intact with 82% of the particles being larger than 63 μm (Figure 2). In addition to the 35% reduction in faecal particles <63 μm, TSS and BOD also decreased markedly in the tanks where fish were fed LARVIVA ORBIT. 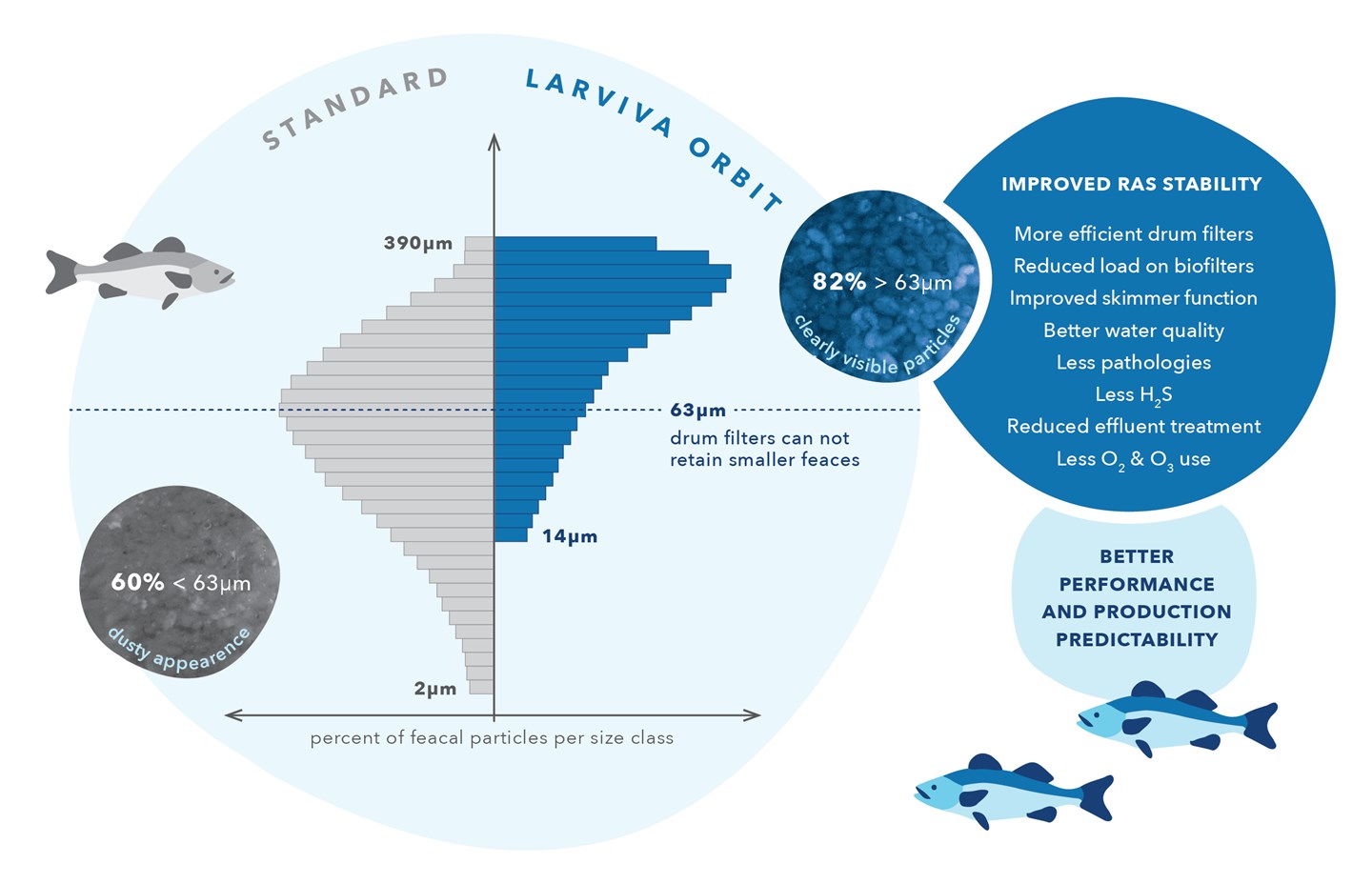 Figure 2. The effect of LARVIVA ORBIT on the structure of seabass fry (6 to 15 g body weight) faeces. The stability of the faeces was assessed in terms of particle size distribution (% of particles within each size class from 2 to 390 μm, central graph) and faecal visual scoring (either faecal discharge in a dusty matrix, small grey circle at the bottom left side or clearly visible faecal casts, small blue circle at the upper right side). The benefits of a larger proportion of faecal particles >63 μm on RAS stability, performance, and predictability are also shown.

Additional large-scale trials are currently being conducted to validate LARVIVA ORBIT success in maintaining high fish growth performance, optimising RAS biofilter efficiency and production performance, and ultimately maintaining a stable RAS that drives production predictability, reduces production costs, and increases productivity and the overall profitability of the farmer. Such successful validation is the last step of LARVIVA ORBIT product development before product launch, which is planned for the first quarter of 2020. BioMar’s development of LARVIVA ORBIT – its specialised feed for marine RAS nurseries – clearly illustrates a product development process that relies on multidisciplinary teamwork and expertise and that is Powered by Partnership and Driven by Innovation.

This article was also published in HatcheryFeed Magazine (Vol 7 Issue 4 2019).