Early results from the “Alga4Fuel&Aqua” research project, in which BioMar Hellenic is participating, indicate that a mix of the microalgae species Schizochytrium sp. and Nannochloropsis sp. can fully replace fish oils in sea bream feed.

Fish oils are the sole source of the eicosapentaenoic (EPA) and docosahexaenoic (DHA) omega-3 fatty acids that fish require in aquafeed. However, the annual global production of fish oils has remained at the same level for the last two decades (approx. 1 mil. tons), with continually rising prices driving up the cost of feeds and aquaculture production. The significant increase in global aquafeed production, amongst other things, makes the discovery of sustainable raw material alternatives to fish oils imperative.

Microalgae are a very promising and viable solution which could reduce fish farmers’ dependence on fish oils and have recently drawn strong scientific and business interest. This is largely due to the fact that microalgae are unicellular marine organisms and thus can easily convert either the massive amount of available solar energy or various relatively low cost nutrients into valuable nutritional ingredients, such as omega-3 fatty acids and amino acids. Some species of microalgae are rich in fats, and in fact contain higher concentrations of EPA and DHA than fish oils themselves. 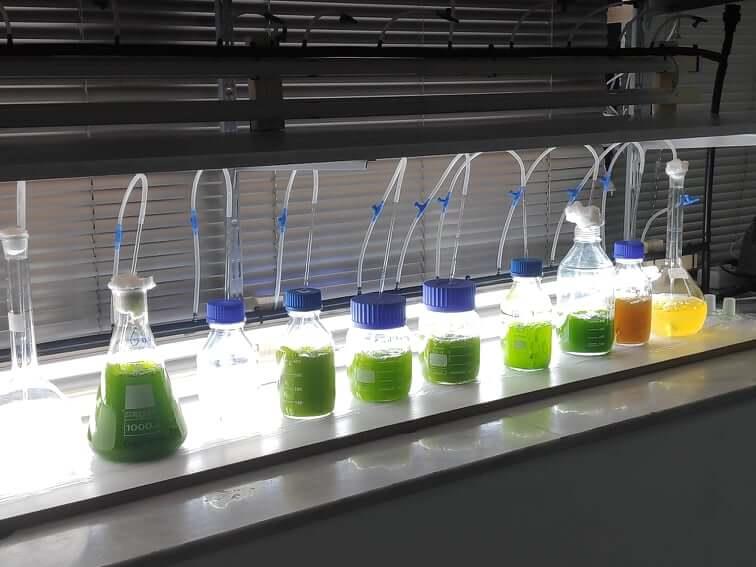 In a research partnership with the University of Thessaly, BioMar Hellenic, based in Volos, Greece, is working on a project on the “Utilisation of liquid waste in cultivation of microalgae for use in biodiesel and aquafeed production (Alga4Fuel&Aqua)”. Among other things, the project aims to use microalgae in the diet of farmed fish , a topic that BioMar Group is highly engaged in, utilising already another type of whole algae ingredient with an extra high marine omega-3 content in feeds for salmon and trout.

For the Alga4Fuel&Aqua project, a trial on a diet conducted over 84 days on sea bream investigated the complete replacement of fish oil in feed with a mix of microalgae of the species Schizochytrium sp. and Nannochloropsis sp. Results showed that the microalgae mixture can successfully replace fish oil in feed, while in fact slightly improving the specific growth rate (SGR) and the feed conversion rate (FCR) in sea bream. At the same time, the EPA and DHA content in fillets from the sea bream fed exclusively on lipids from microalgae was similar to that of fish fed exclusively on fish oil.

Panos Lagos, Managing Director of BioMar Helenic, stated: - In the Alga4Fuel&Aqua project, BioMar’s contribution so far has been providing feed formulations, raw materials, technical knowledge and running a series of analyses related to this first trial. In later stages of the project, we will be involved in the feasibility study and the economical evaluation of the results, giving our inside view of the industry economics and the potential of the utilization of the findings. At the end of the project, BioMar will furthermore provide a sustainability analysis report for the produced feeds. Being a company that strives for a sustainable development of global aquaculture, we are convinced that the outcome of a project of this kind can secure greater access for aquaculture to essential marine omega-3 fatty acids.

As part of the circular economy and for minimising waste in the environment, the project “Alga4Fuel&Aqua” is also investigating the use of by-products from biofuel production to cultivate microalgae for their subsequent use in aquafeed.

The results of the Alga4Fuel&Aqua-project are expected to enhance the sustainability of aquaculture by reducing the dependence of the industry on a finite resource such as fish oil.

The Alga4Fuel & Aqua project is expected to promote research and technological excellence through scientific collaboration between industries and research organizations. Partners taking part in the“Alga4Fuel&Aqua” project are:

Research groups from the University of Thessaly

The “Alga4Fuel&Aqua” research project is part of the “RESEARCH - CREATE - INNOVATE” action, co-funded by the European Union and national resources under the Competitiveness, Entrepreneurship and Innovation Operational Programme (project code: Τ1ΕΔΚ-01580).