The health benefits of Omega-3 and Omega-6

Medicinal practice in humans tells us that an imbalance of omega-3 and omega-6 in the diet can lead to health risks. Disorders of the heart and circulatory system are the leading cause of death globally, and many widespread illnesses have been associated with inflammation. High intake of inflammation-reducing omega-3 fatty acids has been shown to have beneficial effects on, for example, the heart and immune system.

In addition, omega-3 fatty acids have been shown to be essential for brain development and good mental health.

Higher concentrations of EPA and DHA in the diet lead to higher proportions of these being absorbed into the cell membranes of tissues, at the expense of ARA. This will be significant for the outcome of an inflammatory process if the cell becomes affected. Changes in the membrane composition of inflammatory cells will bring about a number of additional effects and be significant for the immune system.

These should be changed.

The effect of a balance between Omega-3 and Omega-6

It has been proven that the relationship between the amounts of omega-3 and omega-6 fatty acids that are present is significant in influencing the course of an inflammation. Both are precursors to neurotransmitters that either help or hinder the inflammation process. To convert these fatty acids, specific enzymes having a limited working capacity are utilised. 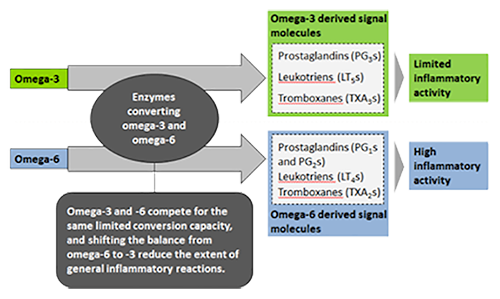 The importance of the sources of Omega-3 and Omega-6

Omega-3 fatty acids can be formed in both marine and non-marine organisms, but the structural construction of the compounds is different for the two sources. Marine fatty acids are long (20 or more carbon atoms), whilst vegetable fats are shorter (18 or less carbon atoms).  This affects their properties and their effects on the body.

Avocados and walnuts are examples of plants that are rich in short-chain omega-3 fatty acids and consumption of these has a number of beneficial health effects. Their effects on the circulatory system and the immune system are, however, dissimilar to those of long-chain marine fatty acids, and to obtain all the health benefits, it is important that the diet also includes adequate supplies of EPA and DHA.

Extensive research has shown that the distribution and effect of EPA and DHA in the body depends on how they are absorbed and transported into the body. Fatty acids can be linked to a diversity of carrier molecules that have an impact on where and how they can be used.

Studies have shown that phospholipid carriers of EPA and DHA from Antarctic krill (Euphasia superba) produce a different distribution in the body than when equivalent amounts of essential omega-3 fatty acids are obtained from other sources. Specifically, this includes increased levels of EPA and DHA in major organs such as the brain and heart.

Furthermore, reduced fat accumulations in the liver have been measured when krill has been used as a feed, as well as reduced amounts of fat deposited between organs in the abdominal cavity.

This suggests that krill oil leads to a different distribution and metabolism of fat in the body than fish oil. 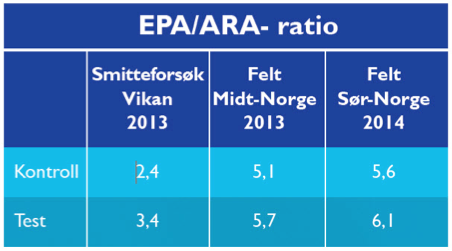 Biochemical analyses of the composition of fatty acids in the myocardium of fish placed on trial diets, showed increased levels of EPA and a higher EPA / ARA ratio in all 3 trials.

Read more about the experiments here