Sustainable farming starts with sustainable feed. Success in our sustainability programme is based on how BioMar deals with and resolves the sustainability challenges involved with obtaining raw materials from all over the world, processing the raw materials and creating and supplying high-quality products and services for our customers.

Better health, better quality and greater economy for our customers

The aquaculture industry has grown rapidly and it has not been without challenges.

Development of better feeds and increased knowledge of operations, hygiene and nutritional needs have resulted in the proportion of fish that suffer health problems being substantially reduced, but illness continues to be one of the most important challenges for the industry.

BioMar has developed BRT – BioMar Retention Technology, an operational package of knowledge that we have implemented in our feed production. We use here different process parameters to give the fish full utilisation of the feed. This produces a robust physical quality that is also adapted to the fishes' digestive system for high nutrient intake.

BioMar has developed several ranges of feed that are aimed at strengthening the fishes' immune defences and general health. The use of Superba krill has been shown to have several beneficial effects amongst other things.

The work the improve fish health should focus on prevention. A general strengthening of the fishes' resistance makes then better equipped to resist changes that can threaten health. 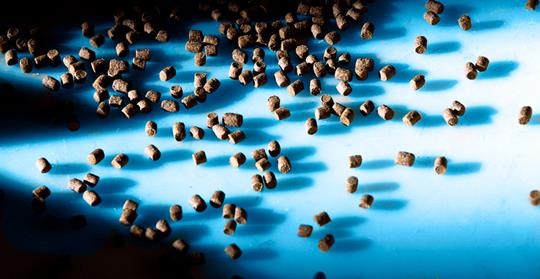 Our demand on suppliers

Our suppliers must be environm

Our suppliers must be environmentally aware

Specific requirements are in place for the purchase of marine raw materials, soya and palm products.

BioMar shall have an overview of the proportion of our supplies of marine raw materials that originate from catches in line with the FAO Code of Conduct for Responsible Fisheries, for example IFFO RS, MSC or similar.

BioMar only deals in certified soya and palm oil products, and we want as far as possible to use by-raw materials in our feed production. Our suppliers must also document that they ensure fair and socially acceptable wage conditions for their employees.

Suppliers that satisfy our stringent requirements with respect to sustainability, the environment and social justice know that they can count on a long-term collaboration that gives them security and motivation to develop their own environmental work. 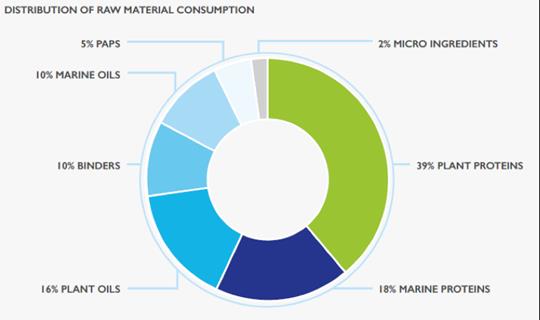 Fish are also the result of what they eat. Correct feed is the key to salmon continuing to be seen as one of the world's most sought-after foods.

Farmed salmon is a healthy and safe food produced in a sustainable way. Every day, salmon forms part of in excess of 14 million meals all over the world.

Salmon is a good source of omega-3, iodine, selenium and proteins and the production of salmon is a very resource-effective form of food production. Farmed salmon have been produced under controlled conditions. With good feed and clean water from clear, cold waters, salmon is both healthy and tasty.

Sustainable from start to finish

Sustainable from start to fini

The world's first gas-powered cargo ship was commissioned by BioMar in 2012. It delivers food to our customers with minimal emissions of greenhouse gases.

The emissions of NOx have been reduced by over 90% and in 2017 we shall commission our third gas-powered cargo ship.

The transport sector is responsible for a substantial proportion of the world's emissions of NOx and CO2. The transition to gas-powered transportation produces reduced emissions of NOx. This in turn reduces the formation of ozone near the ground, which means less acid rain and fewer respiratory diseases.

Gas-powered transportation also reduces emissions of CO2 by around 25% compared with traditional diesel engines. All BioMar's ships are equipped with pumps that transfer the feed from the ship to the facility without contact. This minimises the risk of transferring infectious diseases between different facilities. 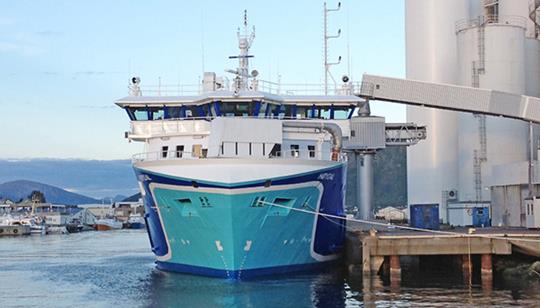 BioMar has been working towards increased sustainability ever since 1960. Firstly with the introduction of dry pellets that remove wastage and reduced contamination from the feed, then with extruded feed that reduces local contamination around the fish farms.

sustainability since the start

1997:
- BioMar names sustainability as one of the company's most important goals.

2009:
- BioMar introduces SMARTfeed, the concept for improved eco-effectiveness in Norway.

2010:
- BioMar launches the first feed within the EU with pro-biotic bacteria that can strengthen fish health, increase resistance and reduce mortality.

2011:
- BioMar Norge is the first company with the aquaculture industry with certification regarding sustainability.

2013:
- BioMar and Lallemand begin initial cooperation regarding the development and use of pro-biotic bacteria in fish feed.

2016:
- BioMar is the first feed supplier to use algae oil with marine omega-3, something that reduces the pressure on scare marine resources in the oceans.